The Coastguard Green, Beachfield Road has been taken over by the Parish Council from the IWC on a 125 year lease, so regular maintenance of the green will continue.  The Coastguard Green is situated on the edge of a cliff and we urge residents and visitors to use the area with caution. 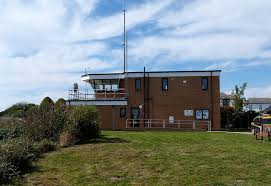 This anchor is from the wreck of the SS Empress Queen which was built in 1897 as an Isle of Man paddle steamer.  When the vessel came into service it was one of the fastest and most powerful paddle steamers on the seas.

The Empress Queen was chartered by the Admiralty on the 6th February 1915, the ship was fitted out as a troop carrier within two weeks after which it travelled to Southampton to begin transporting troops to Le Havre. The ship enjoyed almost a year of highly reliable service until on 3 February 1916, while returning to Southampton from carrying 1300 troops to Le Havre, she ran ashore in a heavy gale on the Ring Rocks, off Foreland Ledge. The Ledge is visible from this point at low tide.

She was stuck fast in full view of the Coastguard Station and the lifeboat Queen Victoria 2 was quickly summoned by distress rockets and launched with difficulty in the poor weather conditions. Coxswain John Holbrook was in command but not with his usual full crew as they had been called up for wartime duties. Older fishermen, coastguards and other volunteers were called on and went to the rescue.

Getting close to the Empress Queen was extremely difficult due to the weather and the rocks. The skill of John Holbrook brought the lifeboat alongside, but he severely injured his hand. Despite this he made four trips to the ship, each time filling the lifeboat to safe capacity. By now the lifeboat was damaged and waterlogged, but on the last trip the remainder of the crew including the ship’s dog and cat were brought safely ashore.  Altogether 110 men were saved with Coxswain John Holbrook receiving the RNLI Silver Medal for a very gallant rescue. The wreck broke up and her remains can still be seen at low water.

Local fishermen, brothers Walter and Frederick Attrill, also helped with the rescue, taking 30 men to shore. They received letters of thanks from the owners.

Villagers turned out to help, as Ivy Clarke recalled.

‘The lifeboat crew brought men ashore until they were exhausted. The tide had gone out and after dark it was difficult for the lifeboat to see her way due to the blackout and weather conditions. Some local women, including my two sisters, stood candles in lanterns each side of the gully between the third ledge and the rocks, so that the coxswain could bring the lifeboat in and anchor her. My sisters, Maisie (14 years) and Gertie (19 years) Clarke from Woodclose, had been standing up to their waists in freezing water. Meanwhile, the other women were lighting the fire in the little committee room at the lifeboat-house, using their own coal. They filled jugs and cans with hot cocoa and tea, whatever could be spared from the rations. On this rescue the Coxswain was awarded a special RNLI commendation, but would not accept it unless my two sisters were recognised for their part in the rescue. They were later awarded certificates for what they had done.’

The anchor has now been cleaned, preserved and sited by the Parish Lengthsmen on the Coastguard Green, overlooking the Empress Queens resting place.

The Information Board came together with information from Bembridge Heritage Society and the surround made by the Men in Sheds.

Thank you to everyone who helped